From the Editor-in Chief’s desk: Your May 27 briefing

On the eve of the big game, when the Fijian Drua take on the might of the Chiefs at Churchill Park in Lautoka, the hype is building up.

In fact you can sense it in the air.

Come to think of it, we have another feast of sports action this weekend. 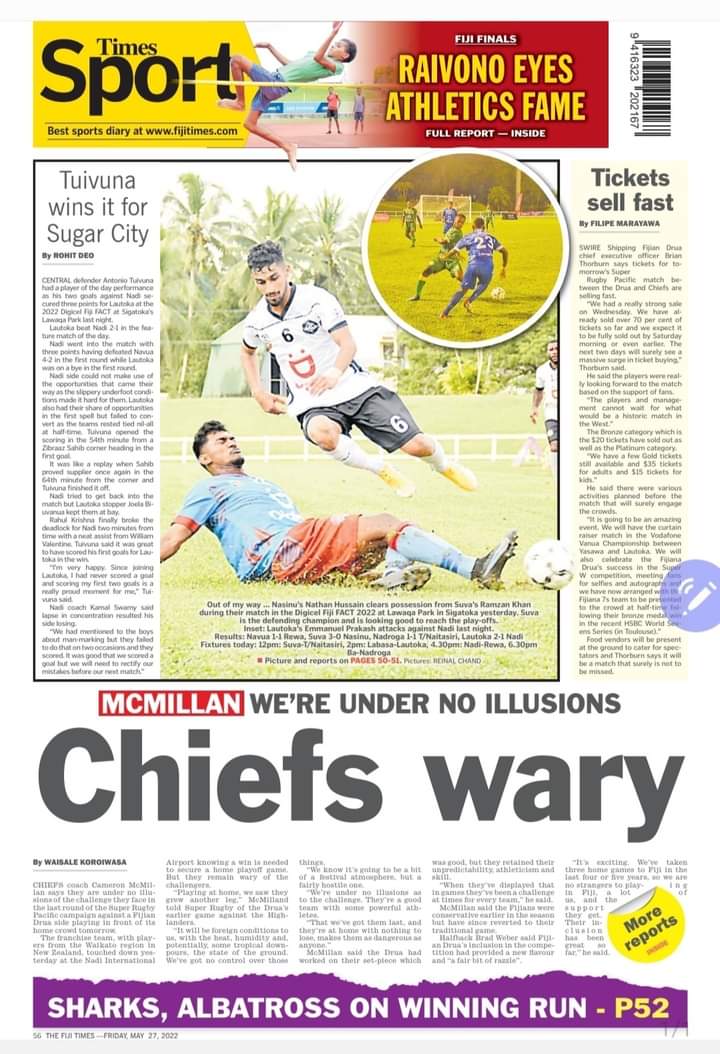 Soccer fans have the Fiji FACT to look forward to. Then there’s the 7s competition in London.

But back on the homefront, the big one on the front page of The Fiji Times’ edition for Friday, May 27 is about comments made by National Federation Party president Pio Tikoduadua.

He has a bone to pick with the Attorney-General Aiyaz Sayed-Khaiyum.

He talks about political parties, and about the electoral laws, focusing on the Financial Management Act.

NEWLY appointed Australian Foreign Minister Penny Wong has announced a pathway for permanent residency (PR) for 3000 Pacific islanders and that seasonal workers would be allowed to bring their families.

You can read this report in Friday’s edition!

Here are some headlines that made the Friday edition as well.

There’s more to read inside but you’ll have to get a copy to know what we are talking about.

You can call our Circulation Department for our subscription rates. Call us on phone: 3304111 and talk to Setaita, Jervis or Shamal.

Think about it! They could organise the delivery of your newspaper fresh off the press every day, right to your doorstep.

No hassles, no worries!

Prefer to read the newspaper online? Then try out the e-edition! There are simple instructions to follow to get to the daily edition!