Kuki singing for Hollywood actress Rebel Wilson on a private boat cruise at an undisclosed location in Fiji on Tuesday night. Picture: instagram.com/rebelwilson 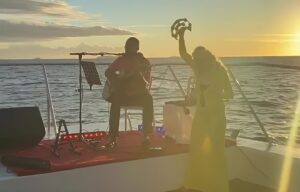 Rebel Wilson shakes a tambourine while being serenaded by local artist Kuki during a private boat cruise. Picture: www.instagram.com/rebelwilson

The singer-songwriter said he was beyond blessed and honoured to sing for the Australian-born actress, adding that it was “definitely a breath of fresh air”.

The singer who is commonly known as ‘Kuki’ said his performance which was organised by Tourism Fiji was well received and appreciated by Rebel Wilson’s media team.

“It was reassuring as well to see that her and her media crew truly appreciated my performance.

“Goes to show that we have an abundance of talent here that’s definitely world class, those were their own words as well”, he said.

The performance went viral on social media yesterday after Rebel Wilson shared a few Instagram stories to her ten million followers of Kuki performing during the private boat cruise.

Rebel Wilson who is rumoured to be in Fiji for a tight-lipped project was spotted with her glam team on a private helicopter ride. Her team was then escorted to sand bank where the actress was seen waving a fan (iri).